Over 740 participants convene at a hybrid forum on areas of mutual interest to the EU and the Philippines, ranging from geopolitics to the rule of law, human rights, energy and food security 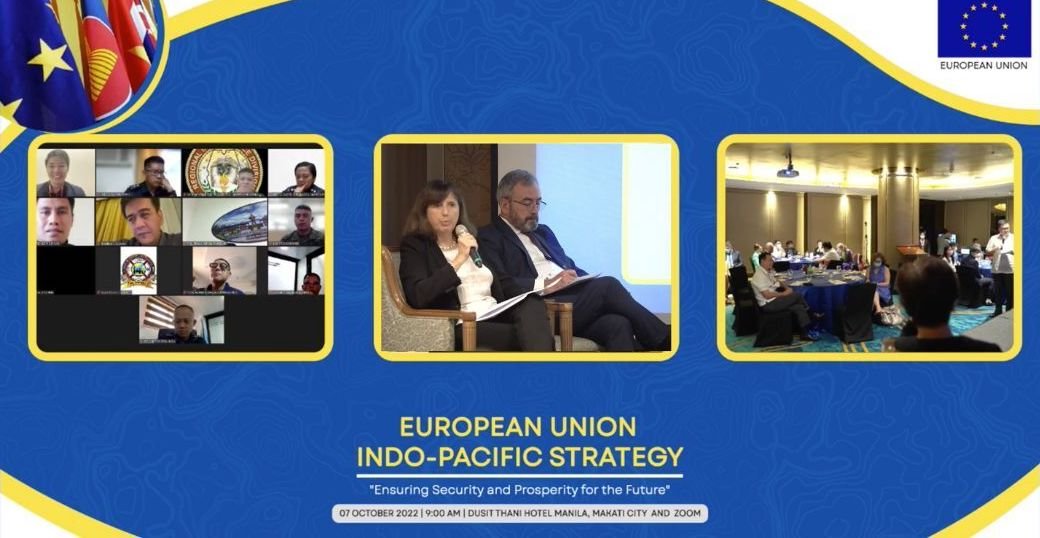 On 7 October 2022 in Makati, the EU Delegation to the Philippines (EUD) carried out a high-level hybrid forum titled ‘EU Indo-Pacific Strategy: Ensuring Security and Prosperity for the Future’. Representatives from government, diplomatic missions, institutions, non-profit organisations, academia and the private sector attended on site and online to exchange views on EU and ASEAN priorities and collaboration in the Indo-Pacific region.

In his opening remarks, H.E. Luc Véron, EU Ambassador to the Philippines, stressed that the EU’s commitment to engagement in the Indo-Pacific remained steadfast despite the challenges faced. “The EU, through the EU Indo-Pacific Strategy, wants to work with its partners in upholding the principles of peace, stability, prosperity and respect for human dignity”, he stated.

Ms. Paola Pampaloni, Deputy Managing Director of the Asia and Pacific Department at the European External Action Service (EEAS), made a point to clarify that the EU Indo-Pacific Strategy was designed not for confrontation but to encourage and build cooperation and enduring partnerships.

H.E. Laura Del Rosario, Ambassador and President of Miriam College; Prof. Victor Andres Manhit, President of Stratbase ADR Institute; and Prof. Manuel Everga III, Director of Ateneo de Manila’s European Studies Programme expressed their appreciation for the EU and its efforts in the region. They further voiced their support amid the climate of geopolitical competition for a multilateral cooperation that maintains international order, democracy, international law, human rights and the rule of law.

The forum was broadcast live and can be viewed here: http://fb.watch/f-F7B4kyam