A series of recorded statements underscore the 45th anniversary of EU-ASEAN ties, featuring the voices of EU and ASEAN thought leaders and the youth in highlighting accomplishments and raising hopes for the future 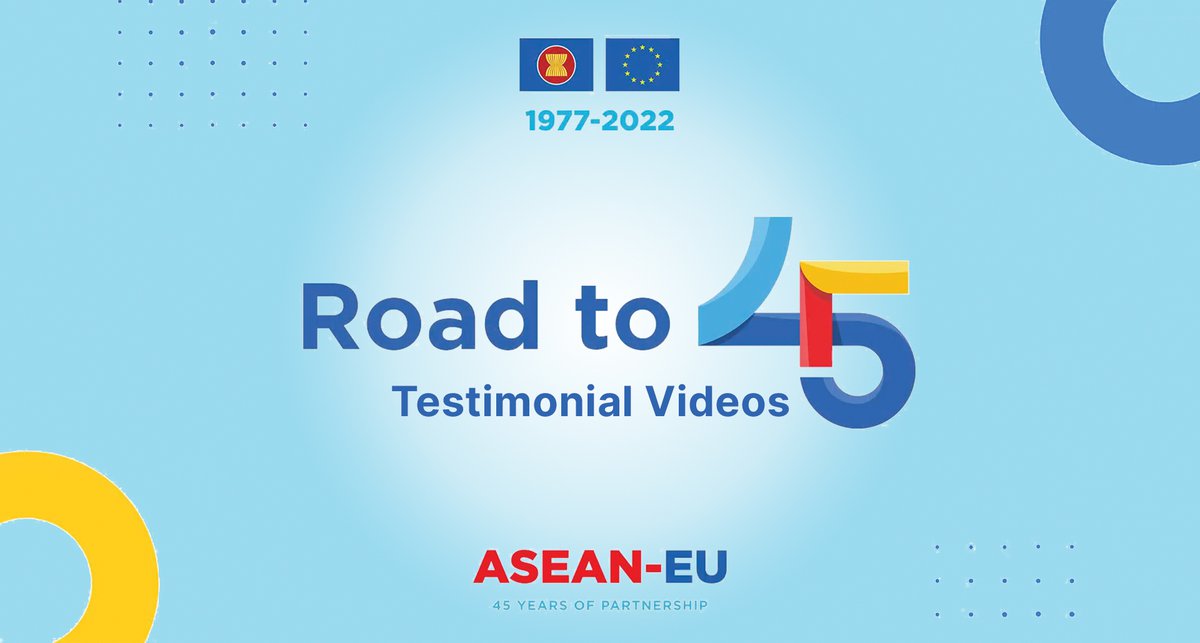 To commemorate the 45th anniversary of EU-ASEAN relations, the EU Delegation to ASEAN (EUD) produced a set of 14 testimonial videos — 10 from thought leaders and 4 from youth representatives — highlighting the strategic partnership and shared goals of the two partners.

The series serves as key awareness raising products for both the EUD and EU External Action to promote the 45th anniversary of the EU-ASEAN dialogue partnership.

The first episode of the video series was aired on 9 May (Europe Day), and weekly serials were published until 6 August (ASEAN Day). The full set of interviews is publicly available on social media.

Interviews were conducted by Ambassador HE Ma. Angelina Miciano Sta. Catalina, former Director of the Foreign Service Institute of the Department of Foreign Affairs of the Philippines (DFA), and former Philippine Ambassador to Finland. Statements from high-level interviewees included ASEAN Secretary-General Dato Lim Jock Hoi, College of Europe Rector and former High Representative of the EU for Foreign Affairs and Security Policy Federica Mogherini, and the EU’s first dedicated Ambassador to ASEAN HE Francisco Fontan. Former Philippine Ambassador HE Rosario Manalo and Singaporean Ministry of Foreign Affairs Ambassador-at-Large Tommy Koh also shared their insights, expressing their confidence in the next generation’s ability to bring together people of all walks of life.

Each statement presented a unique angle of the EU-ASEAN partnership, through varied backgrounds and experiences along with shared hopes for stronger cooperation in the future.

Interviewees emphasised the significance of building relationships with shared values and principles that allow for a more harmonious world. They also highlighted the weight of having a rules-based international order, effective and sustainable multilateralism, and free and fair trade as a result of the robust relationship between the EU and ASEAN.

People of all ages are called to continue supporting the EU-ASEAN friendship, founded on the principles of growth, security, and the desire to improve international relations. Marked by the synergy of this cooperation, the testimonies are further testament that no ocean or landmass is too difficult to cross for those who envision and act towards a better world.