Despite tensions with Russia at home and the US-China rivalry in the region, the EU’s commitment to ASEAN remains steadfast on the heels of their Commemorative Summit in December 2022 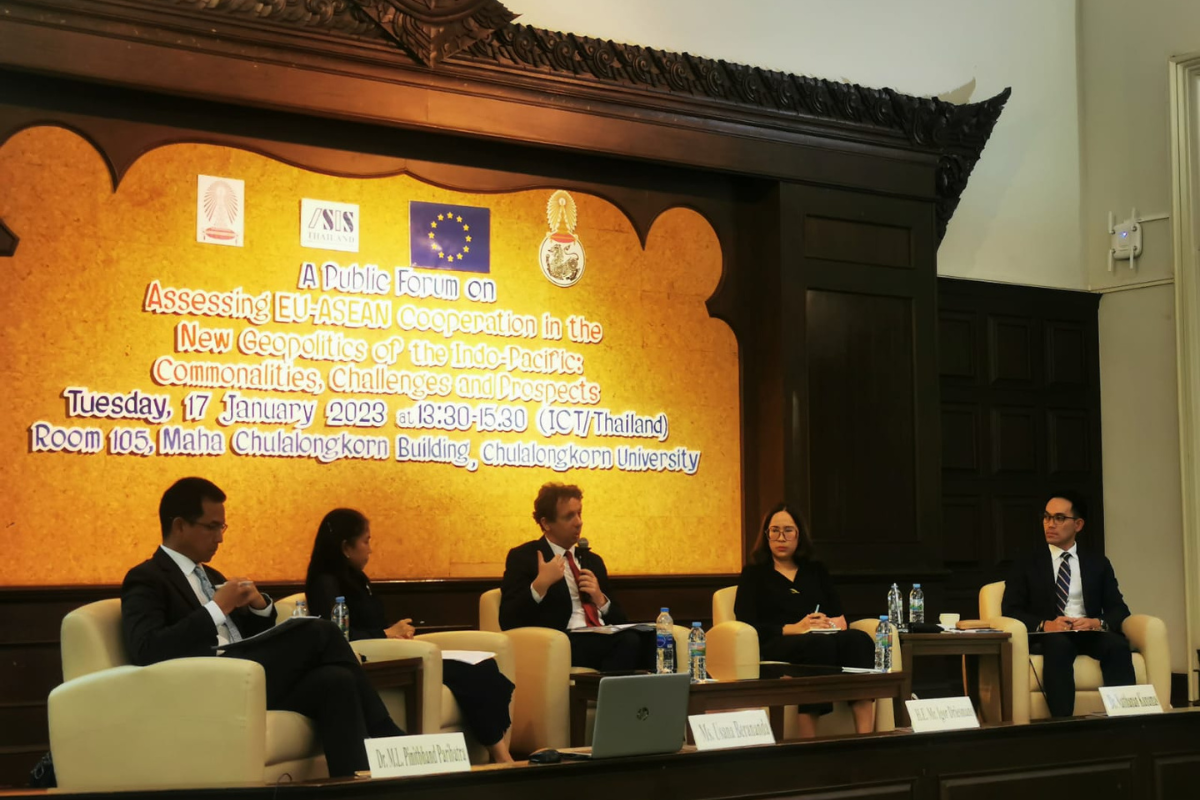 The EU and ASEAN are key partners in trade, the economy and security, and their role towards further prosperity and stability in the broader Indo-Pacific region has moved front and centre since their elevation of relations as strategic partners in 2020.

How the regional blocs will maintain the momentum of their cooperation amidst Russia’s unjustified war in Ukraine and tensions between the US and China was the topic on the table at the latest public forum co-organised on 17 January 2023 by the EU Delegation to Thailand (EUD) and the Institute of Security and International Studies (ISIS Thailand). Their second of six talks, ‘Assessing EU-ASEAN Cooperation in the New Geopolitics of the Indo-Pacific: Commonalities, Challenges and Prospects’ recognised the depth, breadth and relevance of EU-ASEAN and EU-Thai relations, celebrating the commitments of the EU-ASEAN Commemorative Summit and looking ahead from 2023.

Moderated by Dr Pongphisoot Busbarat, Director of ISIS Thailand, the talk featured speakers and panelists including the EU Ambassadors to ASEAN and Thailand along with representatives from Thailand’s Department of ASEAN Affairs at the Ministry of Foreign Affairs, Chulalongkorn University’s Centre for European Studies and Thammasat University’s International Affairs Department.

Open to the public and hosted on the campus of Chulalongkorn University, 80 attendees including students and members of the diplomatic community, Royal Thai Government, international organisations, private sector, civil society, academia and media listened in and contributed to the discussion.

Thai speakers and panelists saw the EU as a ‘like-minded partner’ with shared interests in the Indo-Pacific, and an inspiration for better regional integration in ASEAN. Strengthened EU-ASEAN relations in recent years was credited to stepped up engagement with the establishment of the European External Action Service (EEAS) and Service for Foreign Policy Instruments (FPI).

EU speakers and panelists saw an EU-ASEAN relationship that is stronger than ever, with a Plan of Action for 2023-2027 and the Global Gateway package of EUR 10 billion for ASEAN until 2027. They further restated the EU’s commitment to a stronger ASEAN through continued cooperation on trade through FTAs and the EU-ASEAN Comprehensive Air Transport Agreement; a more ambitious green agenda through circular economy projects in ASEAN; and a deepened security engagement, with observer access to regional forums extended to the EU.

The talk concluded with optimism for a steadfast EU-ASEAN partnership in building regional peace and stability and upholding the rules-based international order, despite the uncertainties faced with tensions in the Taiwan Strait and South China Sea.

The EU and ISIS Thailand are carrying out this series of talks to raise public awareness around critical issues in Thailand and South-East Asia in the context, and from the perspective, of EU policies and values. Initiated by the first talk on the situation in Myanmar in September 2022, the events have fostered dialogue that contributes to the proactive implementation of priorities under the EU Indo-Pacific Strategy.

Keep abreast of the next talks taking place over the coming months on EUD’s social media at Facebook and Twitter.