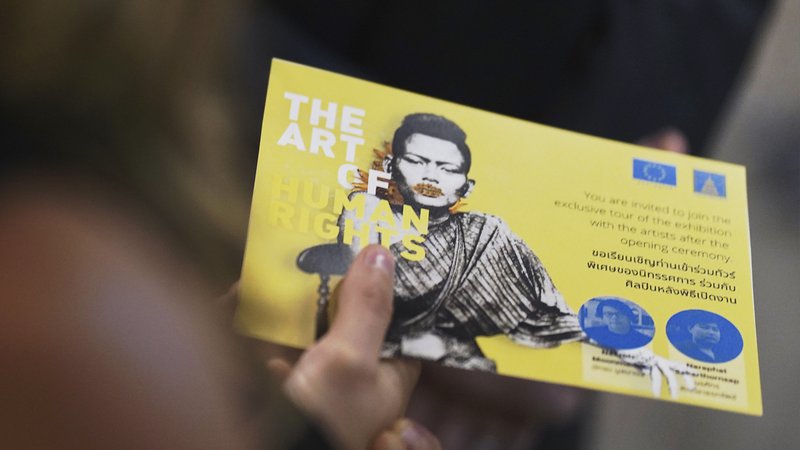 The EU is committed to promoting and defending human rights within its borders and worldwide. It holds that these universal, indivisible and interdependent rights are essential for addressing global challenges. In Thailand, as with many partner countries, the EU works alongside government agencies to promote The European Initiative for Democracy and Human Rights, which covers projects supporting human rights defenders, migrant workers and the fight against human trafficking.

Within this context, the EU Delegation to Thailand (EUD), with support from the Ministry of Justice’s Rights and Liberties Protection Department (RLPD), NGO and media partners, presented a series of public events to encourage dialogue on the death penalty and broader human rights issues during the final quarter of 2019.

From 8 to 12 October, an exhibition from leading Japanese photographer Toshi Kazama and a journalism course were organised to recognise European and World Day against the Death Penalty by the EUD. The five-day event was supported by the RLPD, Thai Journalist Association (TJA), Foreign Correspondent Club of Thailand (FCCT) and Amnesty International Thailand.

Death penalty abolition advocate Kazama showcased a collection of images of death row inmates at the FCCT in Bangkok. The exhibition engaged both the public and media, raising awareness of the severity of wrongful convictions and the death penalty. It culminated in a panel discussion featuring the EU Ambassador to Thailand and moderated by BBC News' highly-regarded South East Asia Correspondent Johnathan Head on 10 October. Following the event, Kazama was interviewed by the media, including TV show host John Winyu for his programme Looking for Troubles.

The one-day 'Training Course for Young Journalists, Human Rights Workers and University Students' was held alongside the exhibition on 9 October. Organised in partnership with TJA, it featured presentations on capital punishment policies in Europe and Thailand from prominent experts, including Judge Hanne Sophie Greve from the International Commission against the Death Penalty and RLPD officials.

In December, The EUD organised another exhibition with the RLPD to commemorate International Human Rights Day, this time focused on the poignant works of two Thai artists. Titled “The Art of Human Rights”, Nakrob Moonmanas and Naraphat Sakarthornsap used collage and installation techniques to reflect their personal perspectives on freedom of expression, freedom from slavery and forced labour, gender equality, children’s rights, freedom of religion, and the right to non-discrimination. Both have earned positive reviews from art followers and popular online media for their previous exhibitions on LGBTI rights, cultural rights and freedom of expression.

A Q&A with the public and artists was also held as part of the opening event, exploring the role of arts in motivating civic actions and transforming society. Some 4,726 people visited the two-week exhibition at YELO House gallery in Bangkok from 13 to 22 December.